BACK TO ARTICLES
February 23, 2016
Whitney VanKlaveren 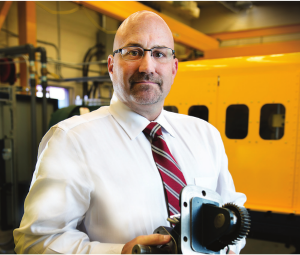 Good collaboration within the truck equipment industry can be a game changer.

The evolution, however, creates some challenges.

“To continue to offer similar PTO performance for the F650 and F750, the PTO input torque would have to increase from 250 foot-pounds to 300 foot-pounds,” Funk explained.

Because many Ford customers rely on Muncie Power products, the manufacturers collaborated during the testing process.

“It is common for manufacturers to work together,” Funk said. “We want to provide the best product for both of us. If they are coming out with a new transmission, we like to have input on how our product will mate with theirs.”

Although Ford also worked with some of Muncie Power Products’ competitors during the development, Funk describes the partnership as a “special relationship.”

“Ford used the Muncie FR66 PTO to validate the torque increase for their transmission. We wanted to continue to use our FR66 PTO for these higher torque applications since the fit, form and function were so similar to the F350-F550,” Funk said.

Working together, Ford and Muncie Power Products wanted to push the power take-off limits to simulate operation in the field. Both manufacturers wanted to make sure the PTO would function with the Ford transmission in any probable working situation.

“As testing at Ford and Muncie began, we identified components of the FR66 that would not quite give the required life at 300 foot-pounds,” Funk said. “We made some running enhancements as the test progressed, identifying areas of concern and improvements that could be carried over to the other Muncie products.”

The testing led to modifications.

“We have modified the FR66 to work at the higher torque setting, and we will be designing a whole new product that will be more robust and handle a larger hydraulic pump,” he said.

Although the market demand isn’t huge, a redesigned power take-off will help fill an important niche.

“At the fall NTEA (association for the work truck industry) Conference in Detroit, it was decided we would spin off the augmented PTO model and call it the FR3C. The ‘C’ being the Roman numeral for 100, hence 3C = 300 foot-pounds,” he said.

The testing with Ford will guide the redesign, and Funk expects the information the developers learned during the process will have practical applications for the future.

“I think it could strengthen our entire product line,” he said. “I do believe some of the features will be able to be incorporated into other products as well."

Based in Tulsa, Tom Funk is a graduate of Oklahoma State University (OSU) and OSU Institute of Technology, holding a bachelor’s degree in engineering and an associate degree in manufacturing technology. Funk also holds an associate degree in airframe and powerplant technology from Spartan School of Aeronautics. He and his wife, Ranae, enjoy traveling. Funk relaxes by doing metal-working, woodworking and building his own 3-D printer.