BACK TO ARTICLES
August 16, 2016
Whitney VanKlaveren

In the early 1960s, a trend swept the United States that would define a period of our nation’s history.

Referred to as the “Hippie Movement,” it was a trend that took with America’s adolescent before becoming more widely accepted. Unlike perhaps any other time period, it was characterized by self-expression, drug use, protests, love for nature, promiscuity and cohabitation.

Needless to say it was a much different society than that of less than two decades earlier, bursting with national pride and support for the troops in the midst of World War II.

While acceptable within this subculture, things that characterized this movement like drug use were still illegal and treated as such under the guiding principles of the United States Constitution and subsequent state law.

Just because the movement became popular, didn’t mean the core values of the American people had changed. As a result, our leaders refused to alter the principles that made our country great based on this trend. And like with most trends the “Hippie Movement” eventually faded because it didn’t align with our message – our values and who we are as a people.

Under the United States Constitution, we uphold the same set of values and message as citizens. We trust in our president and elected officials to do their homework, to make the right decisions so that we remain true to who we are as Americans.

As leaders and members of these great companies in which we serve and dedicate our life’s work, it’s our responsibility to do our homework. It is up to us to address each trend head-on and make the best, knowledgeable decision to protect our core, ensuring our message stays the same despite what’s going on in the world. Although the methods in which we communicate our message can change, the message never should.

Much like the United States Constitution guides us through the trends and changes of society as it did during the “Hippie Movement,” our core competencies at Muncie Power Products have guided us since 1935, ensuring our message remains the same.

With millennials entering the workforce and bringing in new ideology regarding dress code, work hours, time off, etc. we look to these core competencies to guide us in our decisions.

It is our duty as leaders to instill in this new generation that our customers determine the value of our products and services. Solid work ethic and effective branding are the foundation on which stable companies and economies are built.

We believe that millennials are no different than any other generation – they need direction and the knowledge that someone gave us when we first entered the workforce. While some are creating uncertainty about this generation, we believe they might just be the best yet – if only we invest in them. 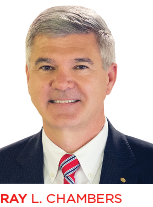 Ray L. Chambers joined Muncie Power Products as Vice President of the Tulsa (Oklahoma) Division in 2004. He became President of the company in 2009, and was named to his current position in January 2012. He holds a bachelor's degree from Oklahoma Wesleyan University and a master's degree from Southern Nazarene University in Bethany, Oklahoma. He is a thought leader and visionary within the industry.