BACK TO ARTICLES
February 19, 2016
Whitney VanKlaveren

At the Columbus Mobile Power Center in Columbus, Ohio, limited resources never get in the way of productivity.

Despite being a crew of only three, the Columbus staff manages to be a pivotal link in the company’s customer service in Ohio and across the nation.

Flexibility is crucial to success, according to Distribution Manager Bud Hummler.

“One minute we could be building a pump, and the next we could beassisting a customer or pulling stockoff the shelf. It’s really about being totally versatile, and there’s a challenge to doing that,” Hummler said.

Learning to adapt is an acquired skill, but Hummler finds that the diversity of the job requirements actually makes the work more satisfying for the crew.

“There are challenges in the schedule, but that’s what keeps it interesting. There’s less repetition. I’m not doing the same thing twice,” he said.

Hummler relies on the site’s team members to maintain an efficient workflow around the warehouse.

Communication is critical to making it all come together, and the Columbus team has learned to interact with precision by being attentive and staying focused.

“Everybody has to know what everybody else is doing. That is the only way to make it work. You have to be a team, so you aren’t duplicating projects or missing things,” Hummler said.

As the company’s product line evolves, the crew has to keep up with technological changes and industry advancements. Continuing education is a priority, as it is at all Muncie Power Products’ sites.

Among the three, team members, the mobile power center’s crew has almost 70 years of professional experience. Hummler said continuing to learn new things is an important part of the job, and he enjoys mentoring his co-workers.

“I pride myself in imparting my knowledge about the stuff I have learned in 40 years of working in the industry. I want my guys to be able to come to me. It makes them a better employee,” he said.

Keeping the staff well informed contributes to the distribution center’s main focus – customer service. Customer satisfaction is central to everything that happens at the site.

“I think about what I have to do today to keep everybody happy,” Hummler said. “Keeping everybody happy is the biggest challenge — and the main purpose. I want our customers to be happy.”

Sometimes work schedules need to be fluid to make that happen. The distribution center’s official hours are 8 a.m. to 5 p.m., but Hummler said he and his team expect to work “till the job is done.”

“When you only have three people, you try to take care of all of the orders that are scheduled for that day first,” he said. “You have to work hard at delegating your time.”

Tasks like unloading shipments and stocking shelves are often delayed until all of the orders have been fulfilled, even if it means staying late to get the job done.

Juggling such a wide variety of duties requires strong organizational skills and a keen sense of ownership from each employee.

“You all have to work for the same goal. You have to be a team. There is no choice with such a small staff,” Hummler said.

Even on the most hectic day, Hummler said it is important not to lose your sense of humor.

“Life is too short to be serious 100 percent of the time,” he said. 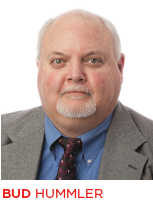 Bud Hummler has been with Muncie Power Products for 10 years. Before joining the Muncie Power Products’ team, he worked for Florig Equipment. He and his wife, Jeanne, have two grown children. In his spare time, he enjoys being outdoors and attending Columbus Blue Jackets hockey games.