BACK TO ARTICLES
August 16, 2016
Whitney VanKlaveren

As operations manager at the manufacturing and distribution center in Tulsa, Brian Maher knows the importance of teamwork.

Joining Muncie Power Products in 1992 after exiting the Army and moving to Tulsa, Maher became part of a team that he’s now been a member of for almost 24 years. 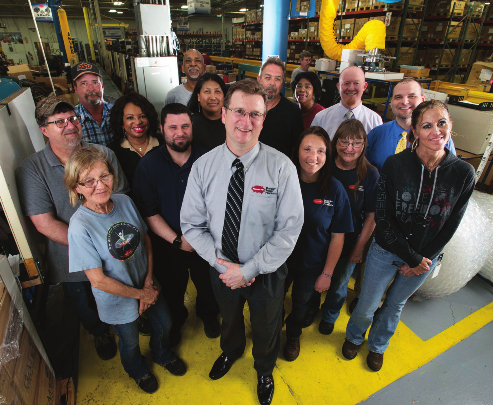 “I started at Muncie Power in the grinding department then went to the gearing department and moved on to maintenance,” said Maher. “I got a chance to start working as a manufacturing supervisor after I completed my bachelor’s degree in 2004.”

Serving in these capacities as well as TG value stream manager and assistant plant manager, Maher has had the opportunity to work with various Muncie Power employees at the Tulsa location over the course of his career.

This has been especially true within his current position as operations manager, as he works with other departments and his direct reports to ensure manufacturing operations run as smoothly and efficiently as possible.

“My main responsibilities are to develop, coordinate and implement strategic plans with the operations team, and to block and tackle for the folks on the floor – remove obstacles so they can succeed – so we can succeed,” explained Maher.

And while he may lead the team as operations manager, Maher is quick to help others and receive input from the entire operations team. Interacting with supervisors who led by example, rolling up their sleeves to do what needed to be done, stuck with Maher and attributed to his approach.

“I believe together we succeed,” shared Maher. “I try to involve all of the team in problem solving and establishing goals.”

For Maher it’s about the team mentality and helping others to succeed and develop. At the end of the day, the success of one benefits the entire company. And helping others is Maher’s favorite part of his job.

“I like being able to help people, to support them in their career development and to provide an environment where they earn a decent living,” Maher said.

“I appreciate that this is a company of opportunity,” Maher shared. “We consistently develop talent from within and provide the opportunity for a person to develop a career, not just have a job.”

Develop a career, Maher has done. But it hasn’t been without hard work and dedication to continuous improvement as he obtained his MBA from Oklahoma State University in December 2015.

In obtaining his degree, one of the biggest benefits was the exposure to other people also committed to personal growth but with differing perspectives. And as Maher notes, it’s important to consider these different views and how to put them to use to improve process, environment and life.

It’s this kind of thinking that also works well within a team, as members work together with differing opinions to reach one common goal.

“I believe that together we get a better picture of what needs to get done, and how to do it,” said Maher. “When we commit to a consensus view, we have our best chance of success.”

Brian Maher celebrates 24 years at Muncie Power Products this September. He holds associate degrees in mathematics, physics and engineering from Tulsa Community College, a bachelor’s degree in business administration from the University of Phoenix and an MBA from Oklahoma State University. Brian is married to his wife, Dana, and they have two children, Quinn and Liam. In his spare time Brian enjoys spending time with his family going camping, hiking and playing music, doing carpentry, completing home renovations with his boys and working on old cars.