Spreader control valves for snow and ice applications have changed over the years. There was a time when your only option was a dual knob manual spreader valve. Today, you can choose from simple manual spreaders to more complex electronic spreader controls. There are pros and cons to all of these options when choosing a liquid or salt spreader for a truck. 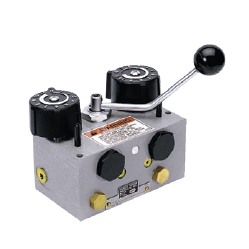 These valves have been around for a long time. They are usually installed in the cab, either at floor level or elevated with a tower. Most have an ON-OFF lever, and two knobs—one controls the feed rate and the other controls the spread pattern. Manual spreader valves are generally readily available and not overly expensive, making them a popular choice.

There are some downfalls with using manual spreader valves, one being its tendency to get hot during use. Depending on how it’s plumbed, it can radiate heat year-round. At times, they may even get too hot to touch and can burn exposed skin. They can also be noisy when used at low flow rates.

Another problem is that manual spreader valves do not evenly apply salt due to varying road speeds, and tend to leave piles of salt when the truck stops. A skilled driver can make adjustments to the feed rate during acceleration and deceleration by turning the valve off when they come to a stop, but this is a distraction to the driver and is seldom done consistently. This results in wasted salt, and wasted time, as the driver has to return for salt more frequently.

There are two categories of electronic spreader valves: the first is a standalone spreader valve, in other words, running the conveyor and spinner only; and the second is a spreader control valve built into a complete electronically controlled central hydraulic system that also controls the front plow, hoist, and, if required, wing plow, scraper, or tow plow. For this discussion, we’ll focus on standalone circuits.

The system's ability to apply a consistent amount of salt regardless of truck speed. Technically, this means the system will adjust oil flow to the conveyor (auger) motor based on speedometer input from the truck. For trucks not equipped with auxiliary speedometer outputs, dual output tail shaft sensors, or GPS based speed sensors, may be required to get the same result. Once the driver determines that they are applying the desired amount of salt, say at 15 mph, and then accelerates to 30 mph, the system automatically increases flow to the conveyor motor to maintain the same coverage. When the truck stops, the conveyor stops. The big take away: Eyes on the road, hands on the wheel.

The second advantage is that there are no hydraulics in the cab with the driver. This makes the cab environment safer and more comfortable. This also cuts down on installation time as installers know it’s much easier to route wire to the cab of the truck than to hydraulic hose.

Electronic spreader valves can be used with any brand or type of stack valve (for cylinder functions) making them an easy retrofit on existing trucks.

What are the disadvantages of electronic spreader control systems?

If the truck is seldom used it will take longer to recoup for the cost difference. Since these are operated electronically, care must be taken to protect all of the electrical connections from salt and road spray. It is recommended to select a system that is equipped with valve enclosures to protect the connections. Because these valves are controlled electronically, some additional steps are required before putting the truck in service. You will need to match your speedometer to the electronic controller by driving the truck at a specified speed and pushing a button on the electronic controller supplied with the valve. This only needs to be done once. There may also be additional adjustment options depending on the brand you select such as: auger minimum and maximum; spinner minimum and maximum; retain settings; spinner blast or spinner pause. Make sure to discuss these options with your supplier.

So, which is better?

Naturally, this depends on your circumstances. If you are located in a region with minimal snow fall, plan to use the truck infrequently, or are just trying to get by for another season, then a manual spreader control is probably your best choice. But, if you need snow and ice equipment to provide motorists with a more consistent driving surface, keeping the in-cab environment safe and comfortable, or conserving salt, you should consider an electronic spreader valve.

Interested in more information about snow and ice applications? Check out what our Snow & Ice Division has to offer.