BACK TO ARTICLES
August 13, 2015
Whitney Rodeffer

Each winter season, municipalities, counties, private contractors and state departments are plagued with the same challenge: keeping roadways safe, while conserving salt and staying within budget. Muncie Power Products has found the solution with its line of electronic spreader packages, the MESP 300 Series.

“Salt is extremely expensive, which makes it difficult to keep budgets constrained while also taking care of roadways,” said Kevin Woehler, assistant group manager, TSG. “It’s a constant struggle, and so what we try to do is create cost effective solutions to conserve salt.”

Muncie Power’s Technology Solutions Group (TSG) saw the the need for a product to meet this challenge and set to work finding a solution.

Their thought process: create a product to meet this need that was cost effective, simple to install and easy to set up.

Out of this process the MESP 300 Series was born, comprised of an electric controller, wiring harness, weather resistant enclosure and cartridge valve manifold.

“What the MESP 300 does is it measures the ground speed of the truck and adjusts the output of the salt spreader to put down consistent material density in pounds per mile,” said Terry Crago, technology solutions group manager.

The MESP 300 Series ensures that salt is being distributed proportionately unlike with many manual spreader valves.

As Crago explained, “With electronic systems like the MESP 300 it’s consistent, which is near impossible to do with a manual because the driver can’t constantly be making adjustments. The driver has no reference besides what he is seeing in the mirror and what looks good to him.”

Roughly 40 percent of trucks still use manual spreader valves, which means salt continues to be distributed ill proportionately and wasted due to the lack of automation.

With electronic systems like the MESP 300 Series wasted salt at intersections is no longer a concern, as the system automatically shuts off when coming to a stop and spreads proportionately to the truck’s ground speed.

“Becoming more efficient saves millions of dollars,” Woehler said. “With the MESP 300 we utilized the technology effectively for cost optimization, finding the balance between cost and functionality.”

While the MESP 300 Series achieves this balance and serves as a solution, the system also offers many other key benefits including: simplicity of operation, driver safety and versatility.

The MESP 300 Series has been designed for easy operation and installation. Unlike some of the expensive models with complex operations and extra settings, the MESP 300 is a basic, yet efficient and effective system.

Contrary to other spreader systems the MESP 300 has been designed to fit just about any kind of truck in operation, is easy to retrofit and furthers driver safety with its remote unit, according to Crago and Woehler.

“It’s always very fulfilling to see a product go from paper concept to actual hardware and see it prove itself,” said Crago.

“We probably have 1,000 MESP 300s in the field I would imagine by now,” added Woehler. “It’s neat to see a truck drive by with our product during the winter and know that our team and I contributed.” 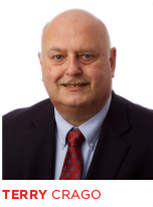 Terry Crago is a veteran employee with 36 years of service at Muncie Power Products. He holds an associate degree in engineering from Purdue University. Eight years ago Terry entered into his current position, leading the Technology Solutions Group. At the end of this year, he will be retiring from the company. Terry will be greatly missed.

Kevin Woehler has been an employee at Muncie Power Products for six years. Before entering his current role, Kevin held positions in engineering and business development. In addition to a bachelor’s degree in mechanical engineering technology from Purdue University, Kevin is currently pursuing his MBA at Ball State University.