Hydraulic oil: The life of the hydraulic system 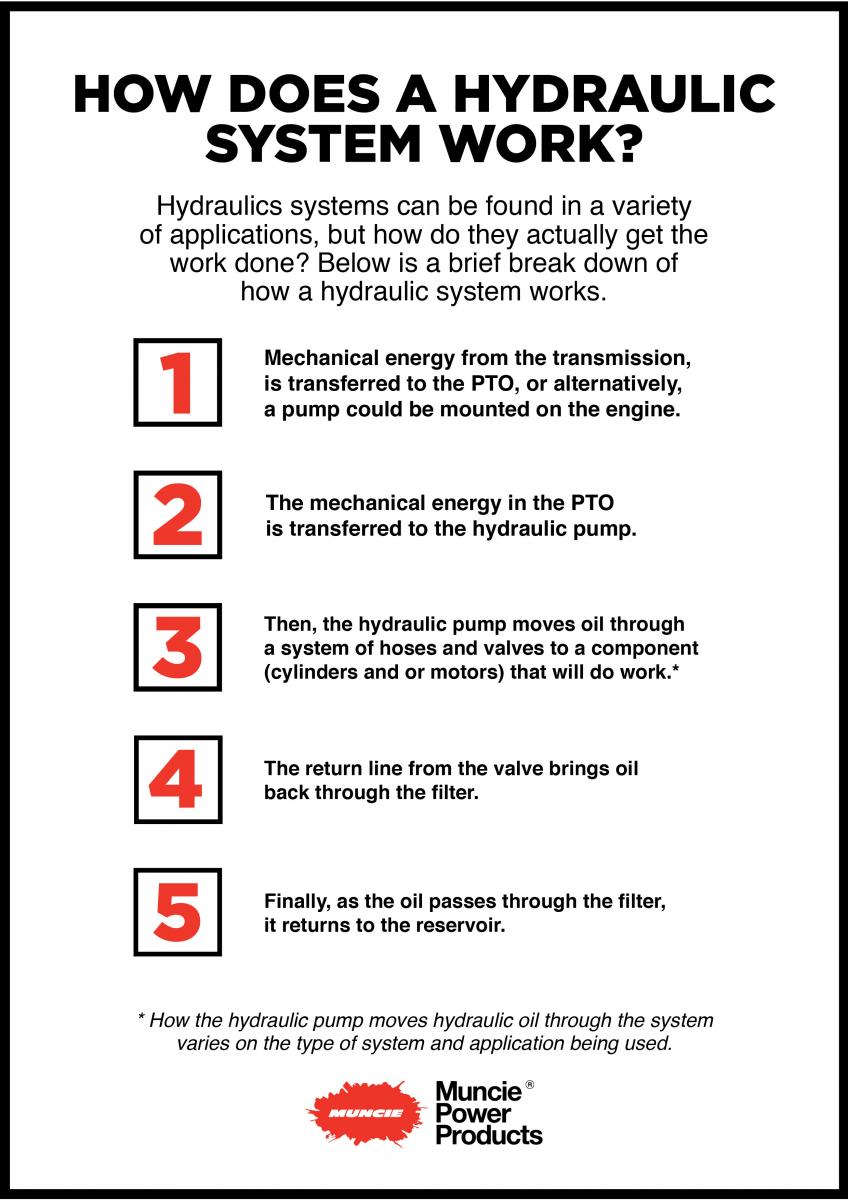 One thing that’s not often talked about is hydraulic oil and its importance in any hydraulic system.

This non-compressible fluid is used to transfer power within hydraulic machinery and equipment and performs several functions for a system. Hydraulic oil delivers power, lubricates components, dissipates heat, and carries away contaminates. To perform these functions, hydraulic oils contain specific additives to enhance their ability to stand up to the pressure, temperature extremes, and other operating conditions to which they are subjected. One other important function of hydraulic oil is to deliver contaminates to a filter where they can be removed from the system or to the reservoir where they can settle out rather than be held in suspension.

Because the oil in hydraulic systems does a dual purpose of lubrication and transmission of power, it’s important to take viscosity into account. Viscosity is the measurement of how fluid resists flowing. This is measured in Saybolt Seconds Universal (SSU or SUS), which represents the amount of time it takes 60 milliliters, or about 2 ounces, of fluid at a given temperature, usually 100º F, to flow through an opening.

RELATED: Keep your oil clean: Contamination and its many forms

As previously mentioned, hydraulic oil helps lubrication of the system, which leads to discuss lubricity. This is the ability of oil to maintain a protective film on metal surfaces. This oil film prevents friction, which can lead to excessive wear and heat generation.

Interestingly enough, the thickness of the film is related to viscosity. When there is a higher viscosity, the film is thicker, in turn forming a thicker film on internal components. While automatic transmission fluid is often used as hydraulic fluid, it’s a poor choice because it loses film strength in high pressures and temperatures, despite its excellent thermal stability.

In truth, there is much more to oil than petroleum. Oils contain additive packages specific to their function. Motor oil, for example, contains high temperature and detergent additives. Quality hydraulic oils must contain high pressure, anti-rust, anti-wear, and anti-foaming agents—all are necessary for the oil to do its job. Selection of hydraulic oil should be based on frequency of use, maximum PSI, climate, and how essential the piece of equipment is.

It is important to remember that these additives are heat sensitive. The ideal operating temperature for hydraulic systems is 100º–140º F. Temperatures over 180º F can contribute to oxidation, robbing the oil of its ability to perform. As additives cook out, they leave behind varnishes, which can cause valves to stick and degrade performance. These oils feel sticky to the touch rather than slick. Heat also affects performance efficiency. As a rule, system efficiency suffers approximately 1% for each 10º F over 130º F. At 180º F, that represents a 5% efficiency loss and a ? reduction in the projected useful life of the oil.

Muncie Power Products does not promote specific manufacturer’s brands of oil, but does recommend the use of quality petroleum-based hydraulic fluids. Different climate temperatures require that the oil viscosity be appropriate for the operating conditions. Consult the oil manufacturer for your exact application needs.

While many people may use the terms hydraulic oil and hydraulic fluid interchangeably, there are small differences in the two.

It consists of oils and additives that are designed to transmit power while also acting as a lubricant and coolant. The oil reduces wear, rust, and corrosion and is effective in a wide range of temperatures.

It has similar uses to oil, but has a wider use in automobile systems for automatic transmissions and power brakes and steering. Additionally, aircraft systems require hydraulic fluid.